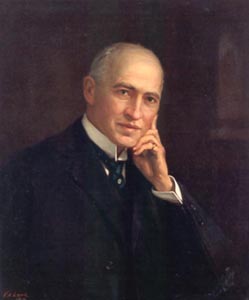 Sifton School is named after the Honourable Arthur L. Sifton, the first Chief Justice of Alberta and the second Premier of Alberta. "Arthur Sifton was born in Middlesex, Ontario on October 26, 1858. He was admitted to the Ontario Bar in 1883. In 1886 he moved to and practiced law in Prince Albert, Saskatchewan. He showed his talent at the bar against such noble counsel as Patrick Nolan. In 1898 he was elected a member of the Northwest Territories Council. In 1903 he was appointed and served as Chief Justice of the Supreme Court of the Northwest Territories following the untimely departure of the Honourable T.H. McGuire from the bench. When the Supreme Courts of Alberta and Saskatchewan were created in 1907 he was appointed the Chief Justice of Alberta. Arthur Sifton left the judiciary and his position as Alberta's Chief Justice in 1910 to enter politics.  He was elected Premier of the Province of Alberta and held that office for a period of seven years."

Info courtesy of The Court of Appeal for Saskatchewan: www.sasklawcourts.ca